Adam Rothenberg from CALL ME ADAM interviews Jack Noseworthy, who is currently starring in Active's production of TWO POINT OH!

Check out the interviews here, and don't miss your chance to catch this innovative new play at 59E59, running through Oct 20th.
Posted by The Active Theater at 7:30 PM No comments:

“A provocative new play by one of the most interesting young playwrights in Italian theatre.” -La Nazione
Leo is an actor who lands the reality gig of a lifetime. Certain it will bring true public acclaim he stops at nothing to win. Is he ready for the demands and temptations of fame? Will he closet his love to fit a celebrity mold? A black comedy about man’s overwhelming greed and eternal conflict between reason and passion.
Venue: The Robert Moss (440 Lafayette Street) 3rd Floor

Get to Know our Playwrights!

The Active Theater is proud to present the final workshop presentations of our year-long play development process. We sat down with Ben Bartolone (TIMEPIECE) and Megan Sass (IN THE MIDDLE) to find out what the process was like for them. Check it out!


ACTIVE: What made you realize this was the story to tell?

BEN: I started to write TIMEPIECE years ago. I had never written anything before, but I had just lost my grandfather, and I felt the overwhelming need to write his story. That's where it started, and it ended up somewhere completely different. Six months after we lost my grandfather, I began working at a summer theater, and my next-door neighbor looked, talked, and acted exactly like him. I spent a lot of time with this guy, and as I learned to write through this play, I realized that my neighbor was the accidental inspiration for George. Not his demeanor, but definitely his charm and sense of humor. But long story short, I started there.

MEGAN: There was a boy I went to high school with who was always on the extreme side of things politically, and was incredibly vocal about his beliefs. As he got older, his ideas only got more extreme, and he started a blog to share them. A few years ago, I was reading his blog, which was full of mostly vitriol and anger. His arguments, bereft of logic, contained few facts, and were really fairly laughable. I asked myself, "How does a person get to this place?" And then I asked, "I was this man's friend. What is it that the two of us have in common?" Right then, I wrote the monologue that is now delivered by Ryan Jones in the second to last scene of the play. I kept writing from there.


ACTIVE: How do you find you work best in writing a play?

BEN: I have remind myself that just because words are in pen, it doesn't mean they're in stone. I just write. I cross out, I write something else, I circle a few lines and point them with an arrow between a different section. I think that some day, my notes will be dug up, and people will think "Oh, the workings of a crazy man!" But always with a pen and paper, it's just slow enough to let the ideas form as I wrote the words. Like the bridge at the end of Indiana Jones and The Last Crusade. If I step, the bridge appears, but I have to trust that it will even if I can't see a damn thing.

MEGAN: In a room with actors and a director I trust. The more I can hear things out loud and make changes in the room itself, the more I think I accomplish. When major structural and theme-based changes need to happen, I go away by myself and work for a while before bringing in the new text. But it is a group discussion, or discussion with a skilled director/producer/dramaturg that generally fuels these rewrites.


ACTIVE: What is it like for you on the first day of rehearsal for your show?

MEGAN: There were three first days of rehearsal in this process, and I was fairly terrified for each one, as I always am on the first day of rehearsal. First rehearsal days are a mix of fear and excitement, because it is not until I hear that particular group of actors read that particular version of the script that I get a sense of the work I need to do. There's always that question of, "Have I accomplished what I intended to with the latest round of rewrites?" That's first in my mind. Second is, "Will these people get it? Will they get the jokes?" It's such a let down when jokes don't read. If you have to explain them to more than two other people in the room, they're probably worth cutting. I think that's one of my greatest worries; that something I think is really funny just isn't to anyone else. That, and that anything emotional I've written will come off as indulgent.


ACTIVE: Six months from now, what will you remember about this process?

BEN: The amount of work that goes into a new play. For film and TV, you get a writer's room. For theater, you get a devoted team of actors, designers, producers, and a director to help shape your vision into a living, breathe piece of work. Nothing else like it in the world, and I will never forget the amount of devotion and love my play has received. I can't believe how far this play has come. I used to read it and think, "Well maybe this is as good as it gets with this project." Active proved me wrong, and I couldn't be happier with the result. I can't wait for you to see it.

MEGAN: There was something I suspected would fail if I tried it with a character, but I couldn't be sure unless I saw it fully realized. I did, and it was such a resounding failure that it taught me not only about the character I was working on, but about any character I might try to create in the future. That, and plenty of other things, you know, how much I appreciated the process and the producers... But I'll save the sentimental stuff for offline.

Come check out the final presentations at Shetler's Theatre 54, 244 West 54th St, May 21st-26th. Visit www.TheActiveTheater.com for more information.
Posted by The Active Theater at 1:15 PM No comments:

The Active Theater announced today that it will award The Active Arts Award to Terry Schreiber, who founded T. Schreiber Studio in 1969, at its 2013 Spring Benefit on April 22, 2013 at 2nd Floor on Clinton (67 Clinton Street, between Rivington and Stanton).

The Active Arts Award honors exemplary achievement in the theater arts as well as a commitment to and support of emerging artists and theater companies. The recipient is determined through a nominating process that includes The Active Theater staff, board of trustees and respected collaborators. Schreiber joins a distinguished roster of previous awardees, including Estelle Parsons and Austin Pendleton.

Featured in Eva Mekler's The New Generation of Acting Teachers, Terry Schreiber has been teaching and directing for 44 years. He is the artistic director of T. Schreiber Studio and Theatre. The Office of the Mayor of the City of New York has declared, "T. Schreiber Studio's commitment to the theater arts has made it one of the foremost professional theater studios and helped make New York Theater Capitol of the World." The company is known for its award-winning productions, including the 2011 New York Innovative Theatre Award for Outstanding Production (Lanford Wilson's Balm In Gilead), as well as its esteemed alumni, including Edward Norton, Maria Bello, Peter Sarsgaard, Debra Jo Rupp, Annabella Sciorra, and Julie Halston, to name a few.

Artistic Director Nathaniel Shaw is thrilled to honor his former acting teacher. He says, "It is a huge honor to present Terry Schreiber with The Active Arts Award this year. He was my acting teacher, as well as several others in the Active family. As a teacher, he has made a mark on the theatre and film landscape that is second to none. As an Artistic Director, he has kept a candle burning bright throughout New York City for decades. He is a true treasure in our industry."

The evening will include a silent auction, delicious hors d'oeuvres and spirits. Tickets to the benefit are $100 in advance or $125 at the door. They may be purchased online at http://www.theactivetheater.com/events/index.html.

The Active Theater, now in its fifth season, has developed a reputation for producing and developing thought provoking, contemporary American plays. Broadway World announced that "For a company that fills the role of the 'new kid' on the Indie Theatre scene,The Active Theater may move to the head of the class very quickly." Active's critically acclaimed production history includes Lee Blessing's Two Rooms, Toni Press Coffman's Touch, New York Premieres of William Donnelly's Magnetic North and Tony Dodge's Venus Flytrap, and two World Premieres developed by the company- Jennie Contuzzi's Body Language and Matthew Keuter's Bridgeboy. First New York Revivals include Romance Romance and Richard Greenberg's The Violet Hour, which garnered an Innovative Theatre Award Nomination for Best Revival. In the 2012-2013 season, to better honor their mission and commitment to emerging artists, Active shifted their focus from production to play development, creating an innovative program in which Active dedicates an entire season to the development of each play selected.
Posted by The Active Theater at 9:41 AM No comments:

The Fulton Theatre continues its 2012/2013 season with a newly refreshed production of A Chorus Line, directed and choreographed by the Fulton's Artistic Director, Marc Robin. The production is a departure from what audiences may already be familiar with-the original staging and choreography by the show's creator, Michael Bennett. Featuring brand new choreography, Robin envisions a fresh take on the production.

Nathaniel Shaw returns to the Fulton in the role of Zach (Fulton: Curly in Oklahoma; numerous regional credits; Artistic Director of The Active Theater).

Read the full article on BroadwayWorld.com!
Posted by The Active Theater at 5:28 AM No comments:

Sarah Shahinian performs at the Oscars!

Active's Associate Artistic Director, Sarah Shahinian, performed alongside Hugh Jackman, Anne Hathaway, Russell Crowe and more, with the movie cast of LES MISÉRABLES on stage at the 85th Annual Academy Awards this past Sunday, in a special tribute to movie musicals of the past decade!

The performance of "One Day More" included an ensemble of 24 alumni from previous stage productions of the hit musical, including The West End, Broadway, Hollywood Bowl, and movie ensemble. Sarah was an original cast member of the 25th Anniversary Tour.
Get some insider information about what the process was like here on BroadwayWorld.com!
Posted by The Active Theater at 5:31 AM No comments:

Active's own Heather Lee Harper will be performing in the World Premiere of a new play called BLOOD PRIVILEGE! 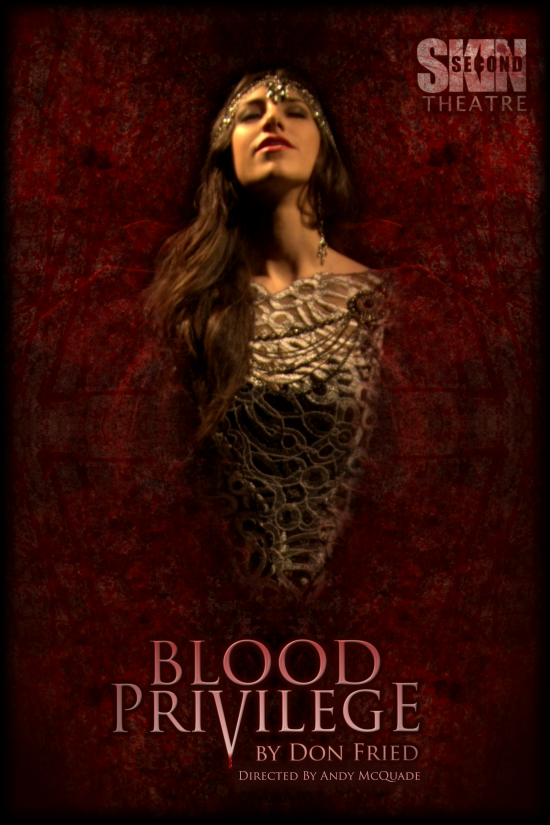 The most powerful woman in Eastern Europe pursues beauty at any cost. But even the "Bloody Countess" can't stop the onslaught of the years and the social and political chaos that is enveloping the world around her.

Based on the true story of Elizabeth Bathory, who was accused of murdering over 600 women. Award-winning playwright Don Fried's dark and visceral new play makes its world premiere February 6 - 24.

More info at www.secondskintheatre.com.
Posted by The Active Theater at 7:22 PM No comments: